In 1982 an independent association was created to promote tourism in small villages in France. In order to be included on this list, each village must meet three initial selection criteria, including, 1) a population of less than 2,000 inhabitants, 2) the presence of at least two national heritage sites, and 3) local support in the form of a vote by the council.

Each village included on this list must pay an annual fee to the association. While, this list has many of the prettiest villages in France, many villages that are worth a visit are not included. This article will include villages that are both members and nonmembers of Les Plus Beaux Villages de France. 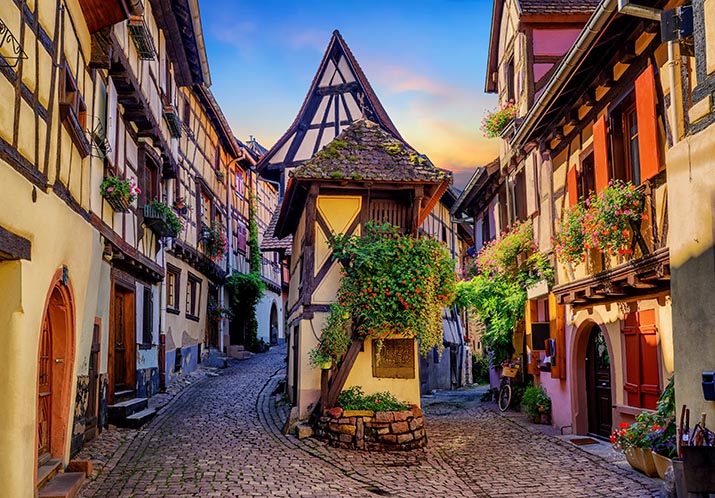 Eguisheim is one of the many medieval villages of France located in the Haut-Rhin department of the Grand Est region. Eguisheim consists of narrow streets filled with half-timbered houses arranged in concentric circles around the Château de Saint-Léon-Pfalz at the center. Eguisheim is a member of Les Plus Beaux Villages de France. 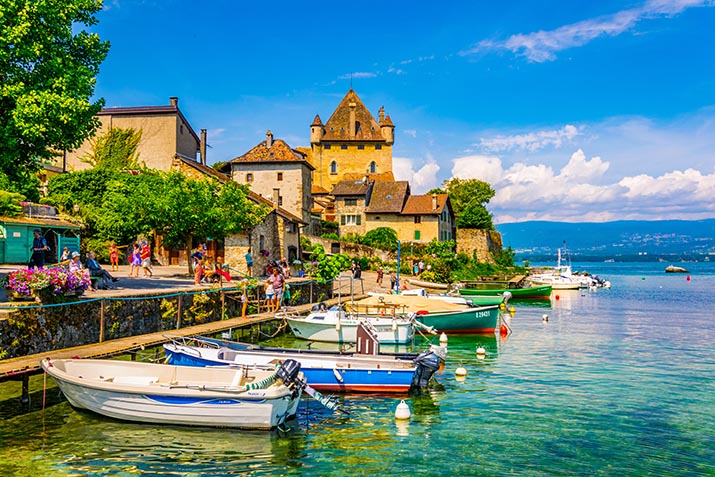 Nicknamed the “Pearl of Lake Geneva” (la Perle du Lac Léman), Yvoire is a medieval village located in the Haute-Savoie department in the Auvergne-Rhône-Alpes and a member of Les Plus Beaux Villages de France. Having received international awards for landscape and horticulture, its floral displays are not to be missed. 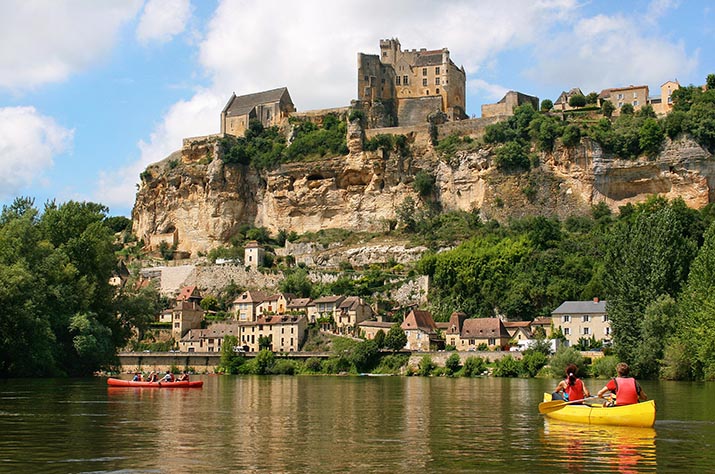 La Roque-Gageac and Beynac-et-Cazenac are scenic Dordogne villages tucked into the north bank of the Dordogne river. These two villages, located adjacent to each other, are both Member of Les Plus Beaux Villages de France and are postcard-worthy. Beynac has been the background of well known films set in the Dordogne, including Chocolat and The Joan of Arc Story. 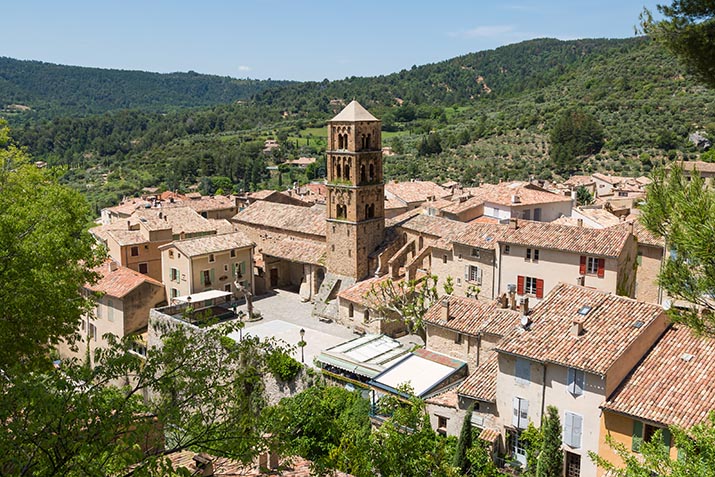 Moustiers Sainte-Marie is one of many villages in southern france. It is a member of Les Plus Beaux Villages de France and is known as one of the most beautiful villages in France. Known for its pottery trade, especially tin-glazed pottery called faïence, this village is nestled against majestic limestone cliffs with a picturesque waterfall that flows through the town. On a clear day at twilight, the sun will reflect off the cliffs giving the village a pinkish glow. Moustiers Sainte-Marie is located almost equidistant from Marseille and Nice, and is situated within the Parc Naturel régional du Verdon, which is one of 53 nature parks located in France and ideal for outdoorsman. 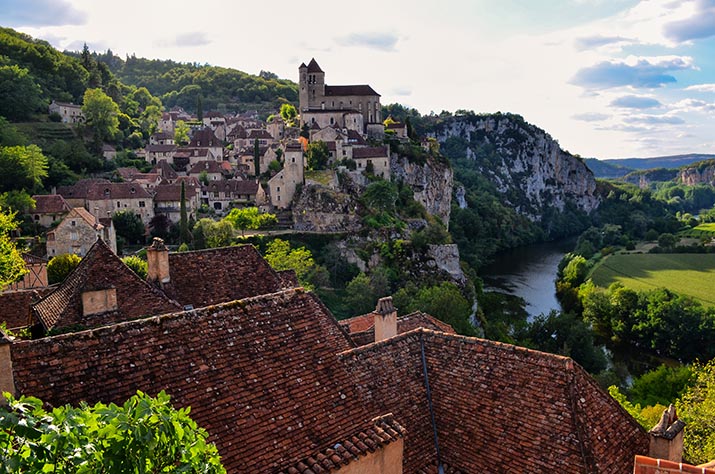 Unlike Moustiers Sainte-Maries, which is located at the bottom of the cliffs, Saint-Cirq-Lapopie is located at the top of a steep 100m cliff overlooking the Lot river. Once voted the Favourite Village of France in 2012, this village contains 13 listed Historic Monuments, though the entire village has been called a museum. The village is not accessible by train, you will need to rent a car (30 minutes from Cahors), hire a taxi from Cahors (about 100 euros), or take the bus from the Cahors station. Home of the artist André Breton, it is a member of Les Plus Beaux Village de France.

Another member of Les Plus Beaux Villages de France is Collonges-La Rouge, a village founded in the 8th century when monks built  a priory and the population steadily increased. Collonges continued to grow until it was one of the largest fiefdoms in France. Following the French Revolution, and around the beginning of the 19th century, the village population decreased until a few villagers remained. In the beginning of the 20th century, the villagers had the entire village classified as a historical monument. The village uses a unique sandstone that is rich in iron oxide for most of the buildings. This red stone, gives the village a nice deep red hue and is also the reason for the village’s name, Collonges-La-Rouge (Collonges The Red). 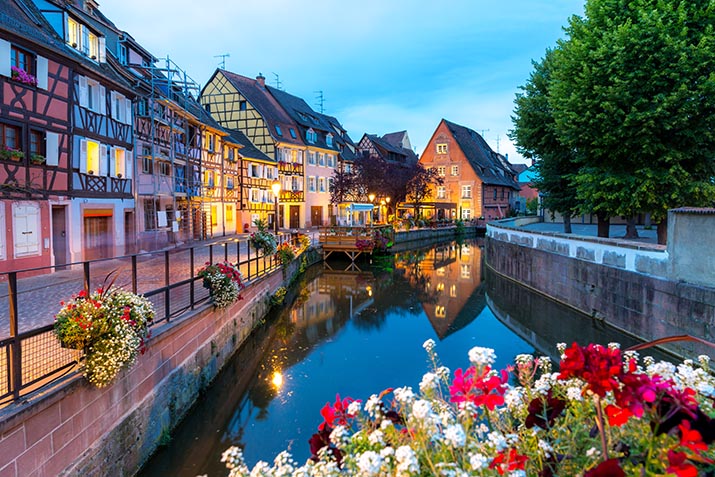 This village, which has switched hands between the Swedish, French, and German on many occasions, is one of the best preserved villages I’ve visited. Streets are filled with half-timber homes from the Renaissance period that are in remarkable condition and flaunt a variety of colors. The canal tour through the village shouldn’t be missed.

Èze, is a gorgeous, picturesque village situated on a hilltop along the Mediterranean coast line. This small village is one of the unique villages in south of france that has maintained its medieval charm over hundreds of years. The village is primarily populated with tourists and visitors as very few local residents live there. Often referred to as a “museum village,” Èze is filled with shops and art galleries. You also shouldn’t have any difficulty finding hotels or restaurants. The best views can be seen from the top of the village, which is about a 45 minute hike. If you aren’t sure if you will be able to make the sometimes-challenging hike, you can take a bus or taxi to the top. You can drive to Èze, but there is limited parking. I recommend you take a bus or taxi.

Located next to the majestic Alps, Chamonix, one of the oldest ski resorts in France, was home to the first Winter Olympics. Surrounded by views massive peaks, visitors from all around the world descend on Chamonix for its outdoor activities.Though skiing is the most popular activity in Chamonix, there are plenty of things to do year-round. You shouldn’t have a problem finding parking and if you’re only staying for one day, I recommend the Aiguille du Midi cable car for breathtaking views. 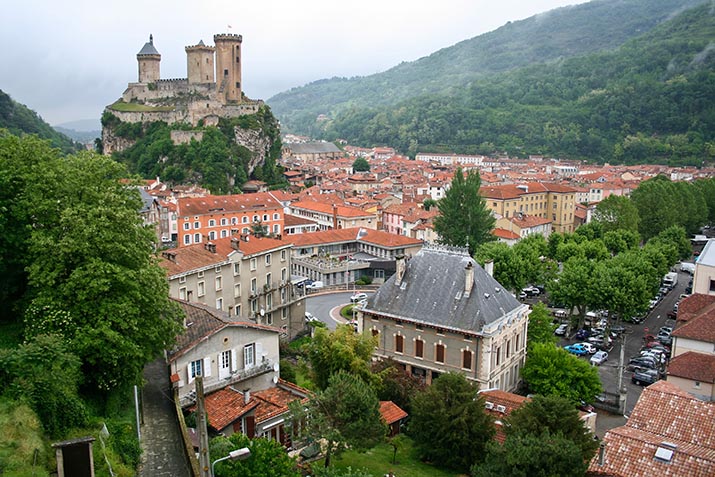 Though not many visitors make their way to Foix, it is worth a visit. It is  located south of Toulouse and is close enough to Spain and Andorra for a quick day trip across the borders. At the center of the city on a rocky hill, the Romans build a fort. This location is now where Château de Foix now stands and overlooks the village. Foix is situated in the base of the Pyrenees and there is plenty of hiking. 4km south of Fois are the Forges du Pyrène, a large living museum of an ancient village, consisting of a blacksmith, clog maker, and baker and 20 more kilometers down the road are the Niaux caves. These caves are some of the most famous prehistoric caves in Europe that are still open to the public, with more than 70 prehistoric paintings. 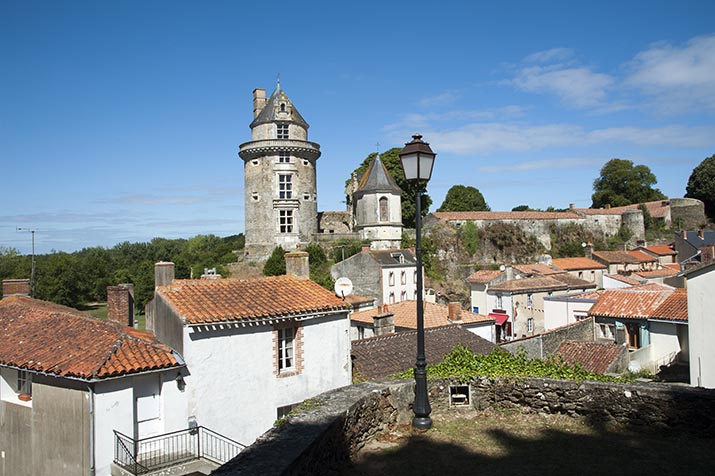 Apremont, a member of Les Plus Beaux Villages de France, is a former quarry village. Located in the Loire Valley along the banks of the Allier River,  Apremont is a village with remarkable architectural unity with its beige plaster, yellow stones, and flowery borders. The castle of Apremont-sur-Allier is a registered historical monument, which dominates the village landscape. A visit to the floral park, which is an old English garden is well worth the visit. 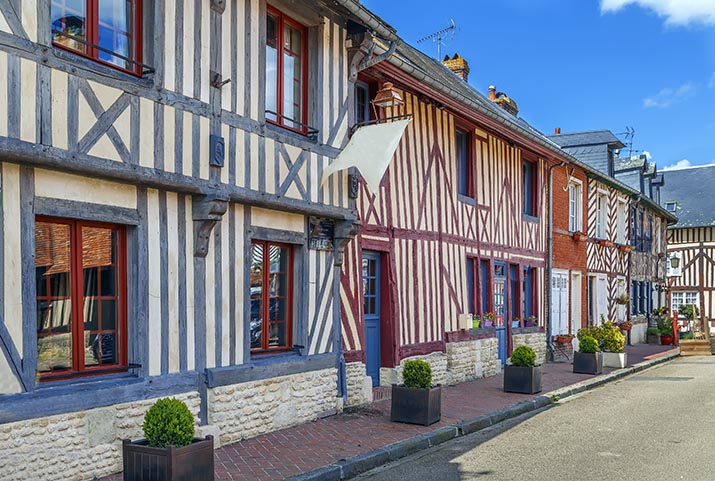 Filled with 17th- and 18th-century half-timbered houses, Beuvron-en-Auge is a member of Les Plus Beaux Villages de France. A rustic Norman village, it is filled with shops of local producers and antique shops. 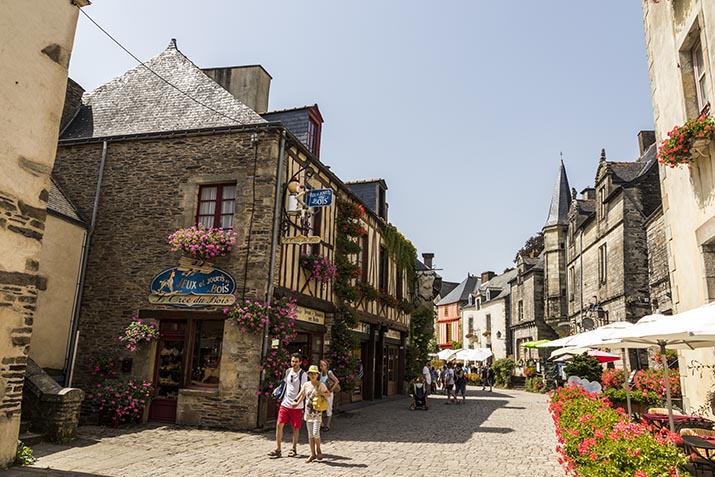 A quaint village with a vast variety of architecture, is a haven for artists. The village surrounds a medieval castle once owned and restored by Alfred Klots, the American painter. In addition to arts and craftsmen shops, be sure to visit one of the artisan biscuit makers, which are highly regarded for their pain d’épices. Rochefort-en-Terre is a member of Les Plus Beaux Villages de France. 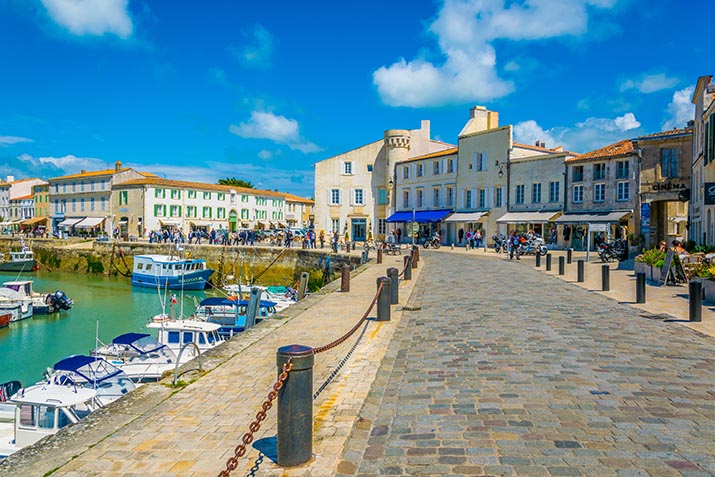 La Flotte, a member of Les Plus Beaux Villages de France is a gorgeous village located on the Île de Ré. Located around La Flotte harbor, the village is a charming and scenic, filled with authentic shops. Île de Ré has been populated since the Romans inhabited it and the entire island is worth a visit. Go here for more information on what to do on Île de Ré. 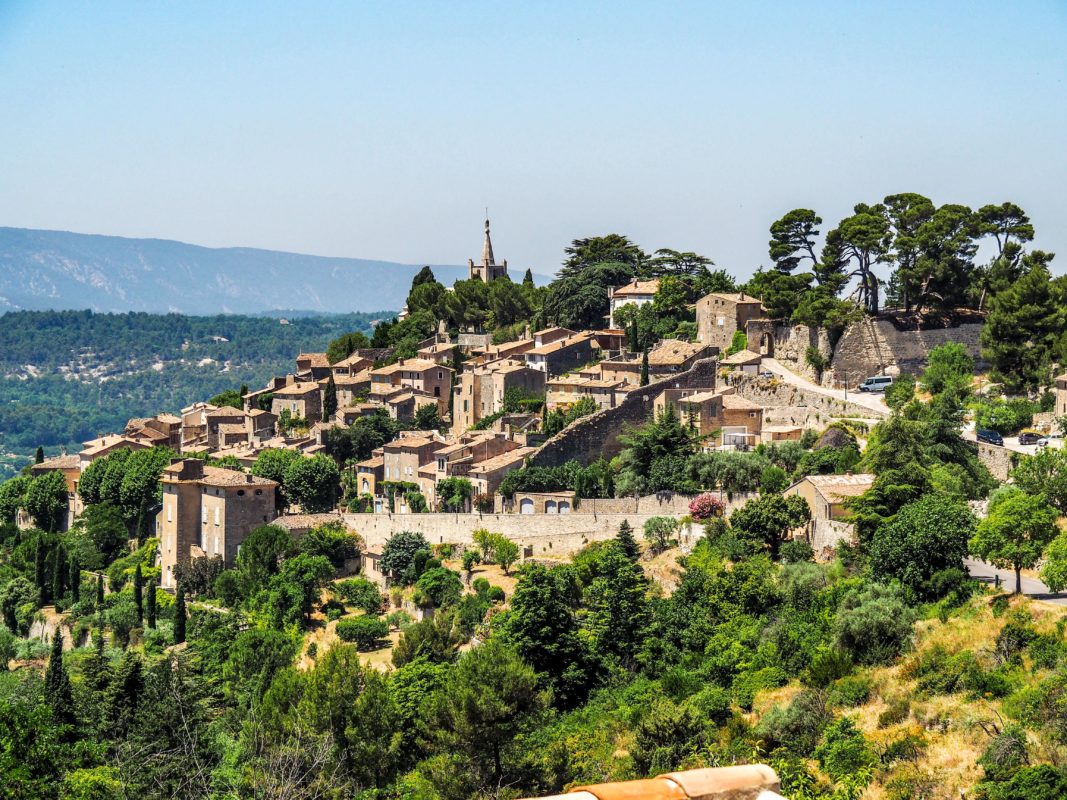 Bonnieux is one of many historic “hill villages” located in Provence-Alpes-Côte d’Azur. The church tower at Bonnieux will be visible from a distance, long before arriving at the village. Monuments and evidence of earlier inhabitants are scattered throughout the village and surrounding area, from Pont Julien, a Roman bridge to 16th-, 17th-, and 18th-century residences. Be sure to take in a view from the top of the village.